The roofing discipline as a whole, has a steadfast position against "Exclusion" of fair competition in public works .

The discipline believes we should have an opportunity to bid on public projects funded by our own tax dollars.

We abhor the "Predatory Sales Models" that advertise "We handle it all", or "Partnering" with government agencies.  The outcomes are predetermined by naming only ONE manufacturer.

No government agency may give even the slightest hint of favoritism, and it exposes our schools to unnecessary suit.

Many examples of this exist, and all one has to do is type "School Roofing Scam" into your browser, and the same on YouTube.  You will find no shortage of investigative reports there.

Please notice the reports feature  two manufacturers: Tremco (aka WTI), and Garland.  It is not our desire to "Exclude" these manufacturers, but add fair competition in the form of major, financially sound, competitive, manufacturers.

Firestone, GAF, and Carlisle Syntec are a few, but we have many fine examples of "Honorable" manufacturers.  All backed by billions of dollars in assets, and strong underwriting capability.

It is the taxpayer, our schools, and our children, we fight for.  In the absence of fair competition, schools are paying a "Premium", upwards of 50% (or more), and receiving no additional benefit.

The bulk of that money (25%) goes straight into a "Salesman's" pocket, and then an average of 4% to the purchasing cooperative.  By this arrangement, the taxpayer dollar is immediately reduced to 71 cents, and nothing to show for it.

Frankly, even if removing, or adjusting, the sales "Commissions", you would still overpay by a large sum.

We do not wish to disrupt commerce, but to make sure the money reaches its intended purpose.  Please note that when I refer to "Bidders", I mean "Responsible Bidders" who meet a standard of criteria:

Financial requirements, and in most cases, protecting the taxpayers with a "Performance and Payment Bond".  This, of course, protects the taxpayer from default, or expenditure of additional monies.
We know that all projects must provide "Serviceability", and "Value".  "Cheap" does not equal "Value" by the way.  This may be remedied through independent consultants (RCI), and specifications that are "Inclusive" .

Eloquently described by the State of New Jersey, here:

Simply put, claims of "We buy in bulk, so you save money", and "our vast negotiating power assures you the best price", are not applicable to roofing, and roofing services.

You may not award multi-million, multi-year, contracts based upon a single "line item", cherry picked to "reward" members of the cooperative.   As "commissioned salesmen", the purchasing cooperative has absolutely no incentive to "compete", and the bigger the contract, the bigger their commission.  Make sense?

Again, we do not wish to "Exclude" anyone, and will fight just as hard for Garland, or Tremco, should they find themselves in a similar position.  We ask for FAIR competition, and should hope our message of concern is well received.

We are spending real money, and know that someone worked hard for it. Someone just like you.

Respectfully, I would like you to consider the position of honorable people, willing to fight for the taxpayers, our schools, and subsequently, our children.

Say "NO" to the purchase of roofing and roofing services, manipulated by false comparisons through purchasing cooperatives.

NOTE: Retired 2003, I do not solicit, nor accept, compensation, or personal advancement of any kind.  Everything I say is supported by public record, and can produce it quite readily.

For those of you who are being excluded, or if you care one bit about our schools, you are free to use this letter as a "Template".  Please verify for yourself, and draw your own conclusions.

When taking the money away from an argument, all that's left is the truth.  That remains in the forefront of my mind, do my very best to bring only documented TRUTH. Nothing else will do.

If anyone ever has an issue (factually) with anything here, please be kind enough to bring it to my attention.  I will retract, or modify the statement.  Please understand that here, I do not offer 'Opinion".  I will respectfully request you furnish public record to support any discord.

My Friends across the globe, I am so thankful, and appreciative for your valuable time spent with me here.

I pray that you reject negativity in all forms, and always remember to keep looking "UP".

An obscene bribery scandal added to the VA's recent "secret list" affair.  It is not getting any play to the best of my knowledge, so thought I'd show you what we're facing in public procurement bribery.

The problem is in fact systemic, and why I fight so hard against "Exclusion" in competitive bid scenarios.  People like this don't give a second thought to stealing your money, and using it for a lifestyle of conspicuous consumption.

http://www.durabilityanddesign.com/news/?fuseaction=view&id=11089&nl_versionid=3894
Thank you to the fine people of "Durability And Design"

A former director of two Veterans Affairs hospitals has admitted taking nearly $400,000 in bribes and kickbacks to steer contracts to a nationwide design-build firm—apparently, just the beginning of what the firm saw as a long and lucrative relationship.
William D. Montague, 61, of Brecksville, OH, former director of the Cleveland and Dayton VA Medical Center, pleaded guilty Feb. 20 to 64 federal criminal counts related to trading confidential construction information with the as-yet-unidentified firm in exchange for cash and gifts.


A former director of two Veterans Affairs hospitals has admitted taking nearly $400,000 in bribes and kickbacks to steer contracts to a nationwide design-build firm—apparently, just the beginning of what the firm saw as a long and lucrative relationship.
William D. Montague, 61, of Brecksville, OH, former director of the Cleveland and Dayton VA Medical Center, pleaded guilty Feb. 20 to 64 federal criminal counts related to trading confidential construction information with the as-yet-unidentified firm in exchange for cash and gifts. 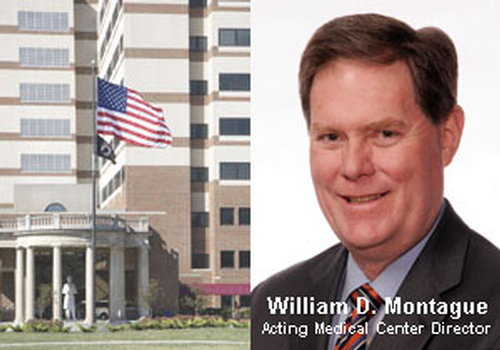 As Acting Medical Center Director of the Dayton VA Medical Center, Montague had "extraordinary access" to project information that would benefit bidders, said one of those firms.

The firm had been bidding on a series of fixed-price services contracts (known as Indefinite Delivery, Indefinite Quantity, or IDIQ, contracts) with the VA. Among other things, Montague "solicited money and a consulting contract" from the firm "in exchange for information related to VA contracts and projects."


The FBI has so far identified the firm only as Business 75, "an integrated design firm with offices throughout the United States, including New York, Illinois, Virginia, Missouri, and California."


The company performed work for the VA directly and through joint ventures and other teaming agreements, according to the indictment. 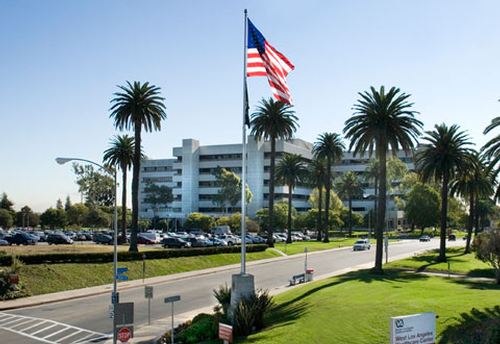 
The superseding indictment details interactions between Montague and Business 75, including internal emails by both parties, the FBI said.


In one email in March 2011, a Business 75 executive noted one $15 million contract that would include $12 million in sales, leaving a $3 million fee for the firm "on the table... ."
"[O]ne of MONTAGUE’s jobs will be to fill up the bucket by directing task orders toward our contract, Going forward, we have two $15M buckets to fill (Central and Eastern regions). That’s a lot of shoveling to get to $30M…BILL has the relationships to help us maximize the contracts…" 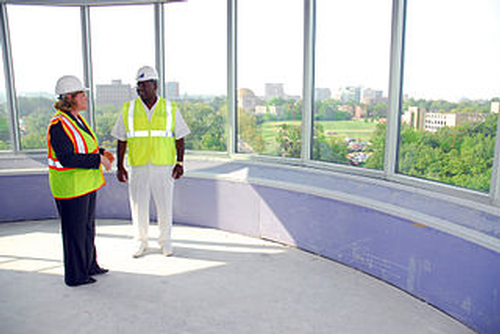 
William Montague was director of the new Louis Stokes VA Medical Center in Cleveland in 2010 when Rear Adm. Julius S. Caesar (right) toured the facility.
The same email noted that five additional VA hospital projects totaling more than $1.2 billion were in the pipeline, adding: "Montague told us about these before they were advertised, which has allowed us to get an early start in developing the team. If we bring him on board, he can help us pull in one or two of these large projects."


Montague used a financial-services firm he created, called House of Montague, to facilitate the scheme, according to the FBI.


Ten days later, the FBI said, Business 75’s principal emailed employees with Montague’s consulting agreement, explaining: “His job is to help us bring in more work from the VA, in part by helping us access key decision makers,” according to the indictment.


The indictment also spells out double-dipping by Montague.


On May 26, 2011, it says, Montague traveled to Washington, D.C., on VA business. Several weeks later, he submitted a government expense report for $1,204 for the trip. Even before he submitted that report, however, he also invoiced Business 75 for $2,741 for “consulting services” related to the same trip, including the hotel bill for which he also later billed the government.


Montague also deceived other VA employees into providing him with documents and information later shared with Business 75, the indictment said.


On another occasion, the indictment says, Montague boasted by email to another firm (identified as Business 74) that he had "obtained the priority scored list of all scored projects for next fiscal year. It is unpublished and unavailable elsewhere."
Did that sting?
Our Federal Procurement Laws allow people like Montague to game the system.  Beautifully illustrated by Montague's greed, and organized scheme.
The VA buys from Purchasing Cooperatives who eliminate fair competition for "Preferred Vendors".
"Exclusion" creates a sucking vortex for taxpayer dollars.  It is ALL by "Design" folks, and I see it every day.
Anytime you see a firm bragging about how much public work they get, ask yourself why.  In many cases, there is a "Montague" facilitating the lopsided "Capture Ratio".
Humbled by those of you who make time to read what I have to say, and much appreciation to my gentle friends across the globe.
Please reject negativity in all forms, and always remember to keep looking "UP".
Respect,
Robert R. "Ron" Solomon
Director, Roof Consultant's Alliance (3,700 Members)
Public Procurement Analyst
CCC 1325620