Sounds pretty easy doesn't it?  Well, today I'd like to introduce a couple of words (and definitions) you often hear from people describing roof systems.

The first word we will focus on is :  "Bitumen"

listen) also known as bitumen is a sticky, black and highly viscous liquid or semi-solid that is present in most crude petroleums and in some natural deposits, it is a substance classed as a pitch. Until the 20th century, the term asphaltum was also used.[1]
The primary use of asphalt is in road construction, where it is used as the glue or binder mixed with aggregate particles to create asphalt concrete. Its other main uses are for bituminous waterproofing products, including production of roofing felt and for sealing flat roofs.
The terms asphalt and bitumen are often used interchangeably to mean both natural and manufactured forms of the substance. In American English, asphalt (or asphalt cement) is the carefully refined residue from the distillation process of selected crude oils. Outside the United States, the product is often called bitumen. Natural deposits terminology also sometimes uses the word bitumen, such as at the La Brea Tar Pits.
Naturally occurring asphalt is sometimes specified by the term "crude Bitumen"; its viscosity is similar to that of cold molasses.[2][3] whilst the material obtained from the fractional distillation of crude oil (boiling at 525 °C (977 °F)) is sometimes referred to as "refined bitumen". 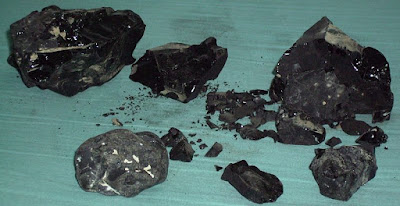 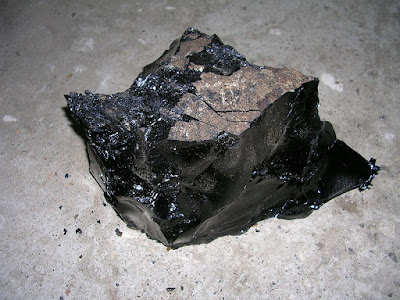 Refined Asphalt (Bitumen)
Reports indicate that Asphalt production is generally 80% for road building materials, and 20% for roofing materials.﻿  And folks, that's a lot of oil being either laid on the ground, or placed atop your home, or business.
Many people are confused as to "White" modified bitumen roof systems (I will describe the "Modified" portion in a moment).  It has a VERY LOW solar reflectance, and can reach temperatures of 200 degrees F., adding to energy demands.
Here is a crew installing "Modified Bitumen" 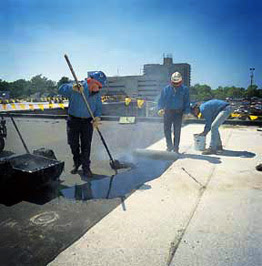 Okay, someone is on the ground feeding 100 lb. cartons of asphalt into a kettle, typically heated with propane burners to a temperature of around 425 degrees F.  I've personally "fired" one of these monstrosities, and would not wish it on my worse enemy.  This job is typically referred to either the "kettle man", or the "fireman". 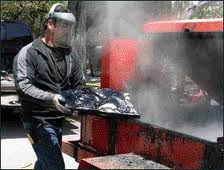 ﻿
Wouldn't you like to spend around 10 hours a day in the hot sun wearing full coverage clothing, and a face mask?  The pieces can easily "splash" the molten asphalt onto the workman, and you will keep in mind he is chopping 100 lb. cartons of this all day.  It is much easier in the morning when the asphalt is cool, and when you strike it with an axe, is almost "glasslike" and splits fairly easy.  Onced  it warms up, the asphalt becomes "gooey", and the axe simply sticks.
The hot asphalt is pumped to the roof, and collected into "hot luggers" 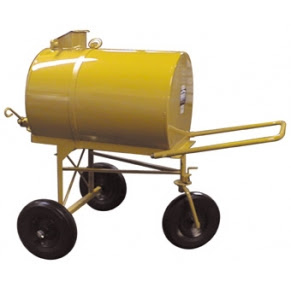 ﻿
Okay, we've heated up the asphalt, pumped it to the roof through a steel pipe, loaded it into our "hot lugger", rolled it across the roof, and emptied it into the "Mop Cart".  You can see the guy using a roofing mop, the other guy is the "setter", and the other is casting ceramic granules into the asphalt "bleed out".  Sometimes referred to as "Feeding the chickens".﻿
Here is a finished Modified Bitumen roof: 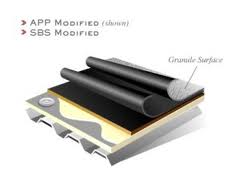 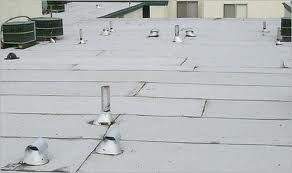 ﻿
﻿You will note the letters "SBS", and "APP".  They stand for:
"Styrene Butyl Styrene" : (Thank you to Johns Manville)
"SBS is a rubberized modifier that increases the overall performance of the sheet by providing excellent elongation and recovery characteristics. SBS modifiers extend the service range of the product, so that it can be handled in cooler temperatures without cracking or shattering, and in warmer temperatures without softening to the point where it begins to flow".

This material is applied with the "hot mop" method as illustrated above.

MANY people hear the term "Rubberized Asphalt", and think they are geting a "Rubber" roof.  This is obviously not the case.  The "Rubber" is a "Modified Polymer".﻿
The roof repels water, but given what we know is a very archaic, and dangerous method.  Also consumes huge quantities of materials that will never break down in landfills, and contaminates water supplies through leaching of nitrogen and phosphorous.
This is obviously not my choice of roofing methods, but it does in fact "keep water out".  It CREATES great demand  in HVAC cooling (approximately 20%).  So if you live in a warmer climate (most people do), this would not be your best option.  Modified Bitumen roof systems typically have a Solar Reflectance Index of .25 (similar to asphalt shingles.  For the record, (according to LEED V2.2, Page 95), the minimum Solar Reflectance Index for a cool roof to mitigate "Heat Island Effect" is .78.  So you can see this is clearly anything but a "Cool Roof".
Today is a very good day, I am happy you are sharing it with me, and always remember to keep looking "UP".
Respect,
Robert R. "Ron" Solomon
Manager, Roof consultant's Alliance
CCC1325620
- November 18, 2011 8 comments:

I was asked to help a colleague in Oklahoma who'd grown tired of watching exclusionary behavior in schools, as it pertains to competitive roofing bids.

Today, I will limit my comments, because the story speaks for itself.  If I have any message, it would be an analogy of "David and Goliath", and to illustrate you can make a difference.  I will always encourage you to speak only from science and public record.  You must arm yourself with knowledge, or you may write to me for help.

As a "Conservative Environmentalist", and appointed a judgeship by the Governor of Florida 5 times for "Sustainable Florida", and "Sustainable Schools", I would like to share my take on things, as it pertains to roofing.

Do not get confused with the "Private" market, and the "Public" market. In the "Private" market, the owners are actually having to PAY their OWN money, where in "Public" structures, the taxpayer foots the bill, which to our government is "Free" money and therefore does not have to be spent in the consumer's best interest, and isn't.

Here is a comment from a private client, who pays the bills:

Brandon has almost twice as much conditioned space as Tampa (64,229 sq. ft. vs 33,005 sq. ft., respectively) yet from the period of April through July of this year Brandon used 40% less electricity than Tampa; for a savings of $30,367 for the period. I realize your TPO roof should get most of the credit but we should also consider the "cool-wall" paint on the exterior and the newer/more efficient equipment. Thanks again for pushing the TPO roof.

"Brandon" has a synthetic white (TPO) reflective roof (inherently LEED compliant), where "Tampa" has a white granular surfaced modified bitumen (petroleum) roof. A conservative approach that was environmentally friendly in every way. 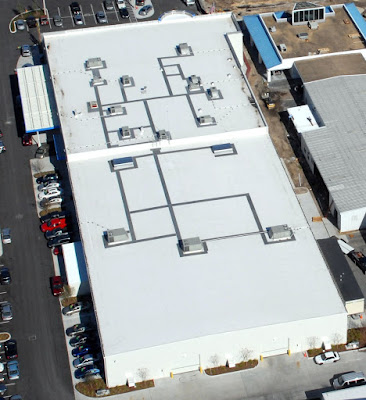 Your home can easily have a roof surface temperature of 200 degrees F., that stays hot well into the night, also known as "Heat Island Effect" (Page 95 LEED V2.2). If you don't believe me, place your forearm on a nice hot day, on your white shingles, and get back to me.

PV technology has been obsolete for years, yet we continue to subsidize this nonsense. The "theoretical" limit of silicon's elemental properties is 33.5% . Period.

"Graphene" and carbon nanotube advancements (commercially available in 5 years) has 10X the elemental properties of silicon, and you will also see it in computer chips as well. "Graphene" is ridiculously inexpensive, and will eventually turn the entire roof surface into a solar collector.

Government only knows TWO terms: "LEED", and "PV". Both of them useless.

This is what I do as a "Conservative Environmentalist". It's "Low Hanging Fruit", yet while ALL my private clients do it for obvious reasons, the government still installs roofs made of oil on the vast majority of their buildings. I GUARANTEE your school district is installing petroleum based roofs, spending more money to install them, paying 20% MORE in energy costs.

I might also mention the copious amounts of nitrogen and phosphorous leaching from these roof systems into our water supplies. Of course, this starves the water of oxygen, and inhibits microbial growth.

Illiterate people, making illiterate decisions, on things they know absolutely nothing about. They haven't the slightest credential that allows them to address a topic.

In Tampa, our City Council thought it would be a great idea to install a $960,000.00 PV system over a petroleum based roof. The roof CREATES A 20% DEMAND FOR ENERGY. The PV (at maximum) is only 20% EFFICIENT. So, for a 1 million dollar investment, we get a NET ZERO.

I'd also like to point out that "Rebates" are not "Free Money". You and I pay for those rebates.

So, that is what a "Conservative Environmentalist" actually thinks, rare as it is.

Thank you for visiting with me here, as I consider it a great privilege to speak with you.  Please reject negativity in all forms, and always remember to keep looking "UP".