"BURNIN' DOWN THE HOUSE" (or School)

I tell people all the time that with today's modern roofing materials, and techniques, there should be no reason to expose workmen (and structures) to open flame or molten asphalt.

Yet another building (school) burned down using outdated methods.  This particular one is approximately 20 miles from my home, and have visited there many times.  A crying shame. 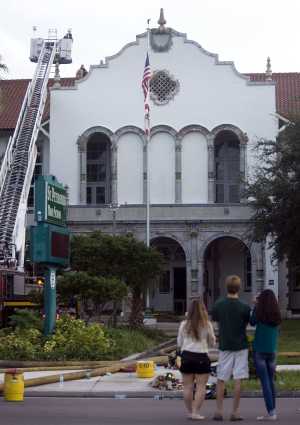 ST. PETERSBURG — For drama students at St. Petersburg High, the school's auditorium is much more than a stage.


Seniors keep their lockers there. Students sit in circles on the stage and chat over lunch. They mingle there before and after class.  "It sounds really trite to say," said Whitney Essman, a senior and a member of the Thespian group, "but it's like a home for us."

That home sustained significant damage early Friday when a fire tore through part of the roof and tech booth, causing more than $1 million in water and smoke damage.

About midnight Friday, firefighters received a call about flames showing from the school's roof. They arrived and found a group of workers with a blow torch. About 3:30 a.m., the workers left.

Thirty minutes later, the fire alarm went off. When fire crews arrived, flames were shooting through the roof of the school's historic three-story auditorium. They called for reinforcements and cut off power to the school, said St. Petersburg Fire Rescue spokesman Lt. Joel Granata.

Two hours later, the blaze was extinguished. But the damage was done.

The tech booth that controls the sound and lighting system was destroyed. Water and smoke damage covered the auditorium. A gaping hole opened in the ceiling. Classes on Friday were canceled for more than 2,300 students.

"I was just, like, stunned," Essman, 17, said. "When a school catches fire you think of, like, the science lab. I didn't think it would be in, like, this place that is so important to me. Then I just started fearing the worst."

The cause of the fire is under investigation, but Granata said investigators think the roofing work contributed to the start of the blaze.

Fort Lauderdale-based Taylor Contracting and Roofing Inc. was hired by Pinellas schools more than three weeks ago to install a roof replacement. After numerous requests for comment Friday, the company issued a statement saying it was "in full cooperation" with the school district to get to the source of what went wrong.

School district officials met Friday to discuss the damage, the repair plan and how to pay for it, said spokeswoman Melanie Marquez. It was too soon to know if the district or the company's insurance would cover the damage.

The district still needs reports from its risk management and fire departments, she said.

"I know there's going to be a lot of work going on," Marquez said.
School principal Al Bennett received calls and emails Friday from students, teachers and alumni.

St. Petersburg High opened in 1898 and had its first graduating class in 1901, according to its website. Its current building at 2501 Fifth Ave. N was listed in the National Register of Historic Places in 1984.

"They all want to help," he said. "I know we can fix it. It's just disruptive."
Bennett said the auditorium may reopen by November, when the Thespians have planned to hold their first play of the year, The Curious Savage. Most of the repairs, including replacing the carpet and cleaning up debris, should be completed by then.

"The show should go on," said Trish Grunz, drama director. "I was happy not everything was affected."

Among the items spared by the fire: props, costumes and the stage.
But until November, the Thespians will need another place to rehearse. The group has a theater conference in October.

About 20 of the 60 or so Thespians met at Crescent Lake Park after the fire. They sang songs from old shows and "bonded for a while," said Luisa Laitano, 17, the group's president.

Classes were expected to resume Tuesday. About 20 maintenance workers will begin the auditorium cleanup and temporarily fix the roof to prevent any leaks this weekend, Marquez said.

"These things do happen," said principal Bennett. "And we just have to persevere and move forward."

Many examples of this exist.  My hope is that one day we can understand applying petroleum roofs with FIRE, is a bad idea.

This is what the workmen see all day long, and you wonder how the building catches on fire: 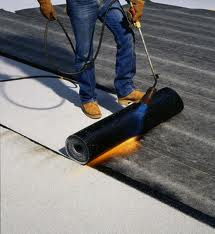 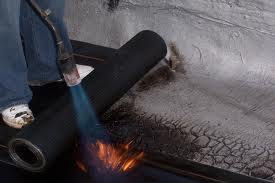 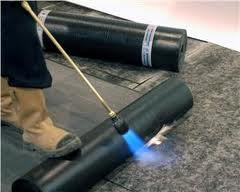 In essence, "PAVING" a roof in asphalt.  These roofs DO REPEL WATER, but all roofs do that by their respective design processes.  This particular roof system can reach roof surface temperatures of 200 degrees F. (creating a 20% energy demand), and will never break down in landfills.

To this moment, I cannot find a RATIONAL explanation of it's use.  I almost forgot:  The TAXPAYERS are paying a PREMIUM without the slightest realized BENEFIT for that expenditure.

Dear friends, I would rather spend my time showing you the POSITIVES of roofing (and there are some), than harping on primitive oil based (bitumen) roofs, and wasting money.

Unfortunately, these scenarios are almost always in public works, even though the DOE preaches against it. Do as I say, not as I do" seems to be the theme.

Lately however, I am meeting interesting people who (I believe) are serious about making a difference, and reversing this trend.  GOOD people whom I appreciate.

As always, I am thankful for the time you graciously invest reading what I have to say, and am humbled you spend your valuable time with me here.

Reject negativity in all forms, and remember to always keep looking "UP".